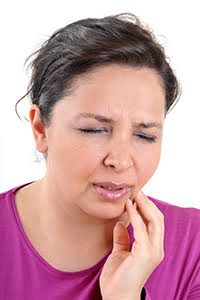 About the only good thing about canker sores is, they’re hidden inside the mouth. Beyond that—they’re painful, annoying, and bound to erupt at the worst possible time. And common though they are, the medical world has mixed opinions on what causes them and what can prevent them from recurring.

Canker sores, or mouth ulcers, are different from fever blisters, though they’re often confused. They occur only inside the mouth and aren’t contagious. Fever blisters, on the other hand, are caused by the herpes virus, are found typically on the lips—and are very contagious!

Canker sores crop up inside your cheek or on your gums and tongue, then disappear within five to ten days. Why? Emotional stresses, food allergies, hormone imbalance, and vitamin B deficiency have all been suggested, but we’re still not completely sure.

Can toothpaste have some effect—good or bad—on canker sores? Again, clinicians have different opinions. Some researchers point a finger at an ingredient added to most common toothpastes to create the foaming action most of us expect. They say this ingredient, sodium lauryl sulfate (SLS), dries out the protective lining in the mouth, making it vulnerable to irritants that can lead to canker sores.

However, a study conducted in the Department of Oral Medicine and Periodontology of St. Bartholomew’s in London concluded, “SLS-free toothpaste had no significant effect on mouth ulcer patterns.”