Fear…It’s All in Your Head

Home » Blog » Fear…It’s All in Your Head
Previous Next

Fear…It’s All in Your Head 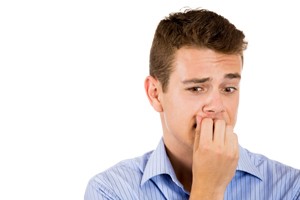 Fear is a learned response, and what can be learned can also be unlearned.

We still have a lot to learn about fear, but certain things we do know. Dental fear, for example, is often the result of vicarious learning.

Take you, for instance. Even though you’ve never had a tooth removed, you’ve maybe heard some pretty scary stuff about extractions, and the result is that the whole idea makes you nervous. That’s vicarious learning. Vicarious wrong learning, too, since having a tooth out these days is virtually painless.

Negative experiences also have a lot to do with fear. A really bad experience in an airplane can make you anxious about flying. More than two terrible trips in the scary skies can make you phobic.

Another thing we know about fear is that there are varying degrees of it, from mild, “Gee-I-wish-I—didn’t have-to-be-here” apprehension to “Touch-that-tooth-and-you’re history” panic.

The difference between fear and phobia is also a matter of degree. If someone’s afraid of dental treatment, he’ll avoid it, but sooner or later he’ll make that appointment. You’ll probably never see a true dental phobic in the office because he just can’t make himself go to the dentist. Dental phobia is slightly more common in women than men, and much more likely to occur in people who have had several traumatic dental or medical treatments.

Try one or more of these self-help techniques:

Above all, face those fears. You’ve got nothing to lose but your beautiful smile.