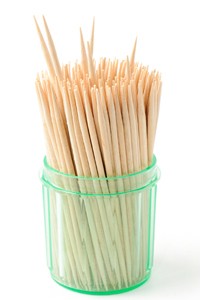 What’s long, slender, hard, sharp, indigestible and potentially hazardous? That common and seemingly harmless sliver of wood called a toothpick. Reports in the Journal of the American Medical Association point to toothpicks as causing thousands of injuries a year, mostly to young children. Youngsters aged five to 14 were most likely to be injured by toothpicks, and children under the age of five were 20 times more likely to seriously injure their eyes or ears.

Adults should also treat the toothpick with a little respect. Three deaths have been attributed to toothpicks after the people either swallowed or inhaled them by accident.

Toothpicks may be small, but their potential dangers are definite points to ponder. If you have a troublesome piece of food stuck between your teeth, a much safer option to consider is to simply grab your toothbrush!