What to Know About Gum Disease

Home » Blog » What to Know About Gum Disease
Previous Next

What to Know About Gum Disease 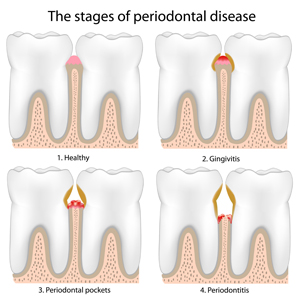 It afflicts as many as nine in 10 adults at some point in their lives, as well as teenagers and children as young as five or six years of age. Yet, many suffer from it without even suspecting anything is wrong.

“It” is periodontal, or gum, disease—in the minds of most dentists, Public Enemy Number one for teeth.

Only for the last 30 years have researchers understood that gum disease is an infectious disorder, caused by many different species of bacteria. But even today, there is no cure. Fortunately, we have learned a good deal about what periodontal disease is and why can be done about it.

The culprits in periodontal disease are the bacteria that thrive in the crevices between gums and teeth, accumulating in the form of plaque, a hard, colorless film. Plaque produces toxins that not only irritate gums, but can eventually attack connective tissue, bone and teeth.

These crevices become “pockets” where the bacteria lodge and begin to erode the tissues that connect gums with teeth. If periodontal disease isn’t checked, the pockets deepen. The havoc spreads. Eventually, the bone around the teeth and roots is destroyed—and the teeth soon follow.

How can you tell if you have a periodontal problem?

If your gums are puffy or bleed after you brush your teeth, gingivitis may be the reason why. But gingivitis can strike silently, without any pain or obvious signs.

Any bleeding from your gums should be a tip-off. Make sure you’re doing a thorough but gentle job of brushing and flossing every day. If bleeding persists, it’s time to come in for a check-up. Different people have different levels of susceptibility to periodontal disease, and some forms—including those that affect children and adolescents—can develop quite rapidly.

Not everyone who has gingivitis goes on to develop more serious periodontal problems. Some people manage to reverse the disease or stop the progress of chronic gingivitis when it flares up.

Until there’s a cure, the fundamentals of good dental health—regular professional care and careful brushing and flossing at home—are still the best line of defense against periodontal disease.

Ways to Fight Back